Hey, everyone! Hope you all are having a great week! I was sick a lot lately, but I’m doing better now. As I’m chilling in bed here writing this up, I have listened to this verbal dispute going on across the street for about half an hour now. It’s a typically quiet neighborhood, but recently some guy moved into this crappy house across the street. He and his wife must be separated because she is always driving over in her black SUV to start screaming matches with him. They’re pretty entertaining. I’m surprised the people next door haven’t called the popo. UPDATE- Somebody finally called the 5-0. They showed up just as he was about to get physical and smash her driver side window. I honestly thought they would eventually just give up because they ended up screaming at each other for over an hour. Next time I’m just calling! Also, this post is a day late because I fricking accidentally poured boiling water over one of my fingers while trying to pour my pierogies in the strainer. UGH.

Okay so here is the warning- this post is VERY PICTURE HEAVY. I’m splitting this post up into 2 parts due to the amount of polish! I’m about to show you all my adventures and haul at Polish Con 2018 in White Plains, NY. My bf was snapping shots the entire time I shopped. Also, before I get into the polish goodness, I have to thank my baby daddy for funding most of this. I was asked what I wanted for Mother’s Day and I chose cash for Polish Con! Here we go!

My nugget with a copy of the program.

When we got there, they were just letting the VIPs in. I got my bag ‘o goodies and went in. Outside they had graciously set up the water that you can see in the background. Also, they had a few selections of a free lunch! It was pretty awesome. I picked a chicken breast on a ciabatta roll with cut up fresh fruit, an apple, chips, and I think something else, but I can’t remember. It was so good.

This is how it looked when we got there.

The first table I hit up was Bee’s Knees, which you can see there in the right hand side.

Here’s moi talking to the lovely ladies at the Flirtin’ table.

Ready to see my haul? 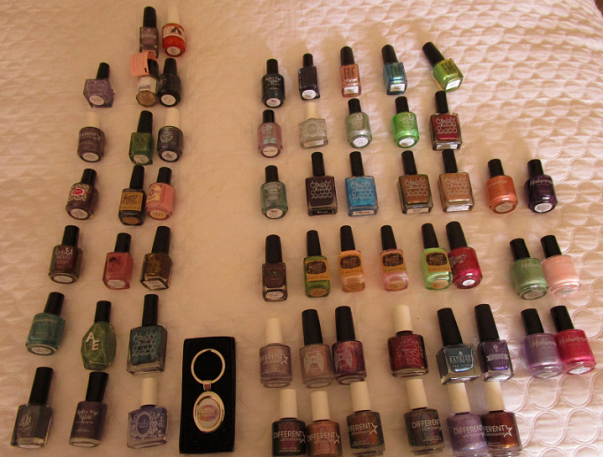 I got a total of 61 polishes, 20 of those being the ones from my VIP. Everyone is waiting on the Great Lakes Lacquer VIP, which will be shipped. There was also a Supernatural VIP mix up, so I’m waiting on that one too. The only brands that I had any product from previously was KBShimmer, Different Dimension, and I owned 1 Takko. The rest are all new to me!

Zechariah 9:16 is a topper filled with iridescent and gold shreds. This was their VIP polish.

Lady Luck by Alter Ego is an army green with silver holographic glitter. This was a VIP polish. Alter Ego did not attend.

Titania by Bohemian Polish is black with green micro glitter and multi-chrome flakies. This was a VIP polish.

Another Bite from Great Lakes Lacquer is described on their site as “Slight burgundy base that is pushed over to a brick red by the copious amounts of aurora shimmer that shifts from red to gold to green. This is finished with iridescent flake that shifts the same and a bit of scattered holographic pigment.”

The Gilded Age of New York by Glisten & Glow is described on their site as being a ” Rich Mahogany Red holo loaded with golden and copper shimmers, pops of blue, bronze and silver holo micro glitters” The color sort of reminds me of more of a raisin shade. This was a VIP polish. Their table was packed with people and I ran out of cash before I got back to them. 😦

Tightope by Ever After is described on their site as a “dusty rose with slight shimmer and rainbow glitter.” This was a VIP polish.

Anchor & Heart Lacquer’s New York Frolic is described in their shop as “a topper style polish, so the formula is sheer and it is lighter on the nail than it appears in the bottle. It is a blue-green base with scattered holo, pink-gold shifting shimmer, and a sparse dusting of bright pink holo glitter in various sizes.” This was their VIP polish.

The NYC Girl by Sassy Cats Lacquer is a rich orange color with what appears to be iridescent microglitter and various shaped iridescent shaped glitter. This was their VIP polish.

The Hustle by Girly Bits is described on their site as “a lime green jelly holo with strong gold/green shimmer”.

What a Bunch Abalone by Girly Bits is described in their store as “a soft minty green holo with a strong pink to gold shifting shimmer”. 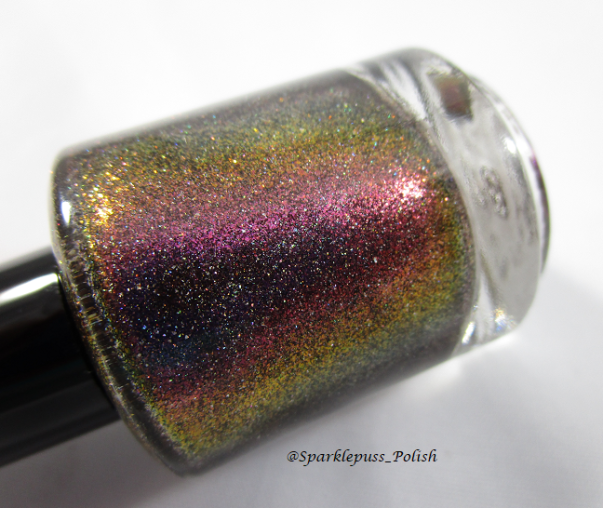 Girly Bits’ Very Important Polish is a purple to red to gold to green multichrome with holographic micro flakes.

The VIP polish from Kathleen & Co is Fairytale of New York. It’s a beautiful lilac color with holographic micro flakies and has a pinkish purple shimmer.

White Plains VIP 2018 by Turtle Tootsie Polish is a holographic leafy green with what appears to be blue and holographic micro glitter or flakies. It’s hard for me to tell, but it’s a very pretty polish!

Magic and Dreams by Turtle Tootsie Polishes is described on their site as “a dark plum purple red magnetic polish.” It’s also got a smattering of silver, holographic micro flakes. 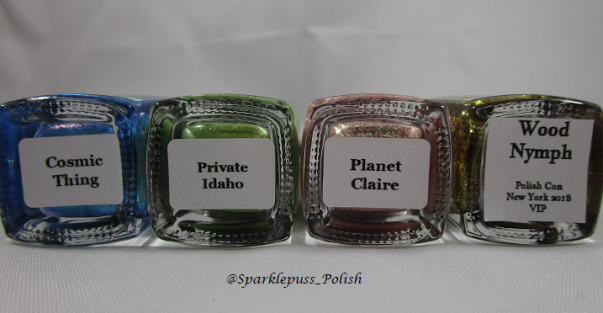 Cosmic Thing by Pepper Pot Polish is described in their Etsy shop as “a shimmer-y foil-y blue/green with a slight yellow shift and blue/green/purple color shifting flakes mixed in. When applied has a speckled look on the nail.”

Private Idaho by Pepper Pot Polish is described in their Etsy shop as ” a bright yellow-y green with green shimmer and yellow gold flakies. “Private Idaho” is opaque after 2 thicker coats(3 thinner coats) and is slightly textured.” 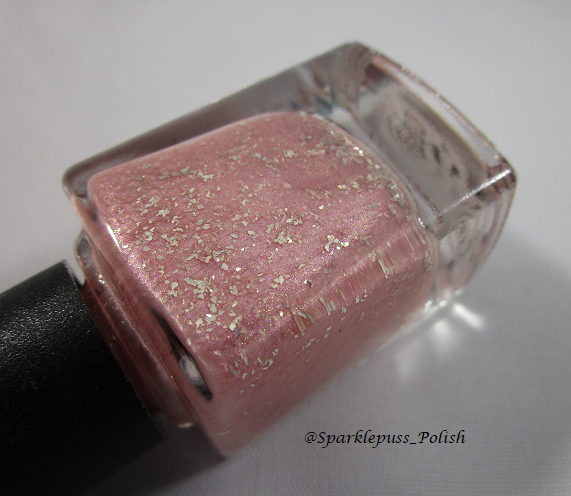 Planet Claire by Pepper Pot Polish is described in their Etsy shop as “a soft frosty pink polish with red/pink flakies & silver flakes mixed in for added retro effect.” They also say it dries slightly textured due to the flakes. Opaque in 2 coats.

Gossamer Gleam by Supernatural Polish is a Limited Edition Polish Con polish. It’s a pink shimmer with iridescent flakies in a sheer base.

VIP in NYC by Takko Lacquer is much more of a dusty purple than this picture conveys. I changed up my camera settings, but I couldn’t get the true color to come through. It has a blue shimmer and pink micro flakies. 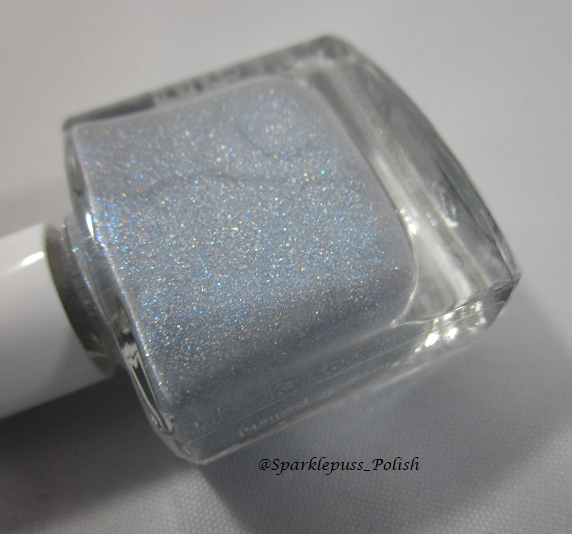 Moonstone by Takko Lacquer is a greyish white base with iridescent micro flakes and an icy blue shimmer. 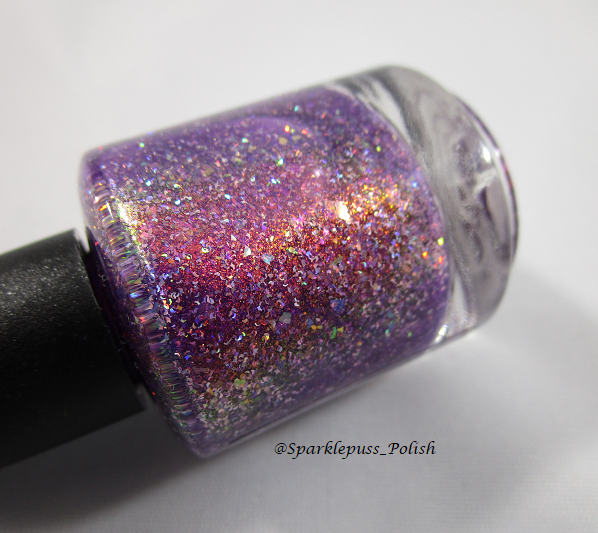 Birthday Ghoul by Supernatural Lacquer a burgundy base with orange shimmer and a butt load of holographic flakies. I think, lol. It is so jam packed with goodness that it’s hard to describe and their site is closed to catch up on orders. 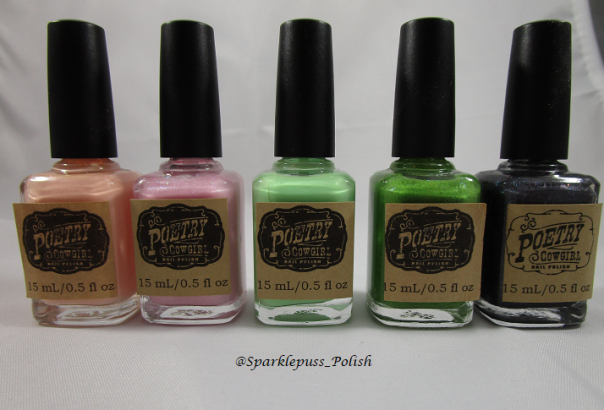 Peaches Almost Ripe by Poetry Cowgirl is described on their site as “a soft pastel peach crelly with subtle green and red shimmer. It has a hint of neon and should be blacklight reflective. Fully opaque in 2-3 coats.” 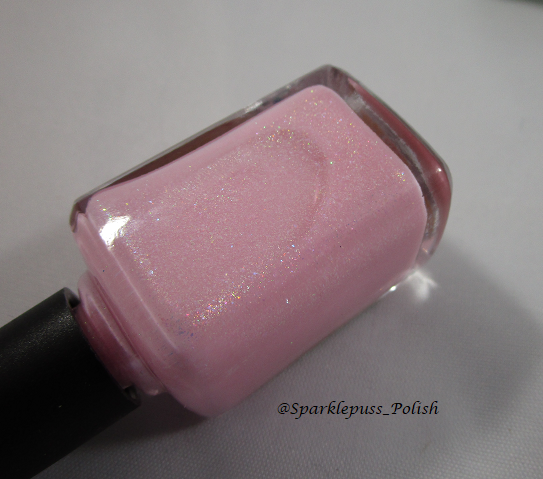 Cupid Is A Knavish Lad by Poetry Cowgirl Nail Polish is a bubblegum pink crelly with red and green shimmer. 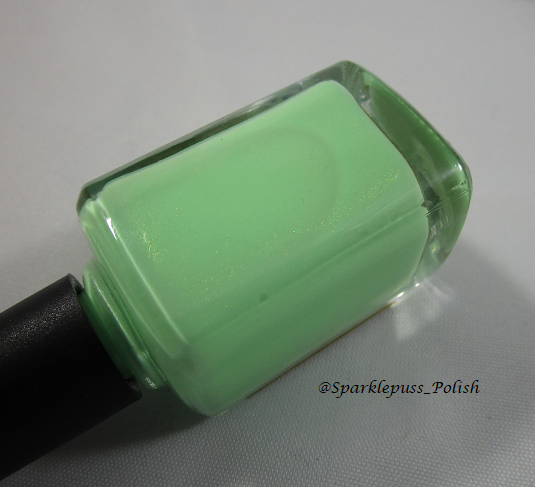 Cucumber Jalepeno Martini by Poetry Cowgirl Nail Polish is described on their site as “a bright ectoplasm green with gold shimmer.” 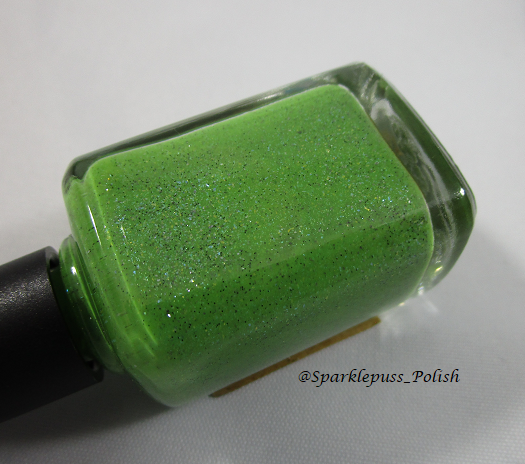 St. Augustine Grass by Poetry Cowgirl Nail Polish is described on their site as “a medium green with black micro glitters, green and gold sparkles, and grey micro flakies.”

Summer In The City is Poetry Cowgirl’s VIP polish. It appears to be a deep charcoal grey with pink, blue, and purple flakies. 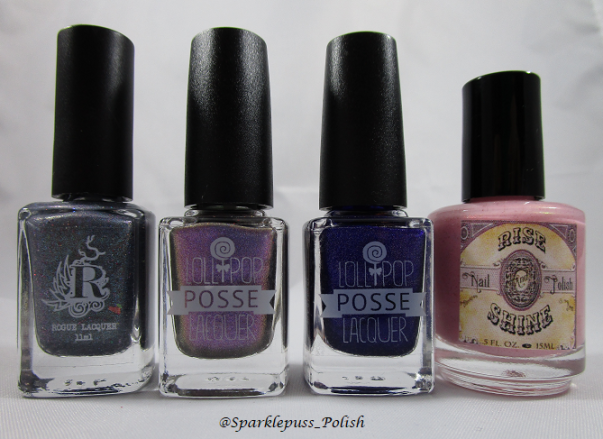 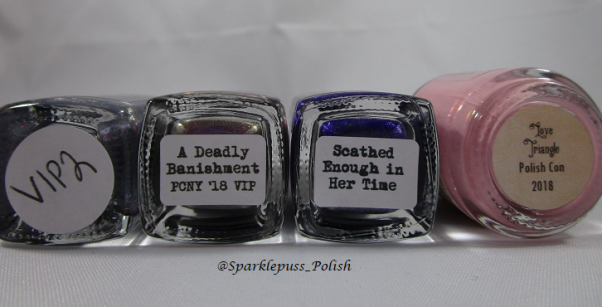 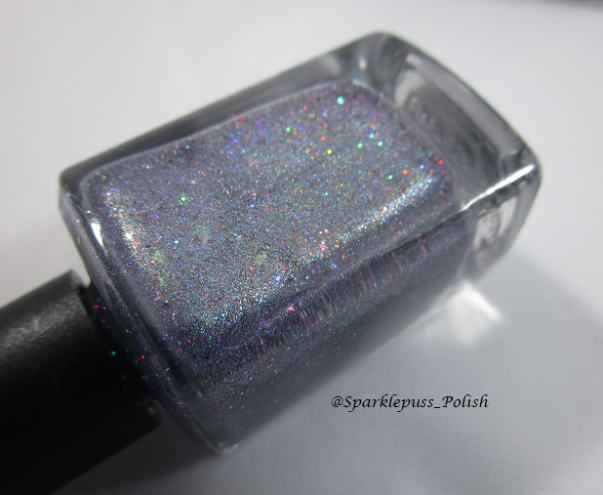 Rogue Lacquer was not in attendance, but sent VIP polishes, of which this is one- VIP2. It’s like a slate greyish blue with aqua shimmer and rainbow flakies.

A Deadly Banishment was Lollipop Posse Lacquer’s VIP polish. It’s like a holographic multichrome. I’m struggling to actually describe it, as it changes every which way I move it! 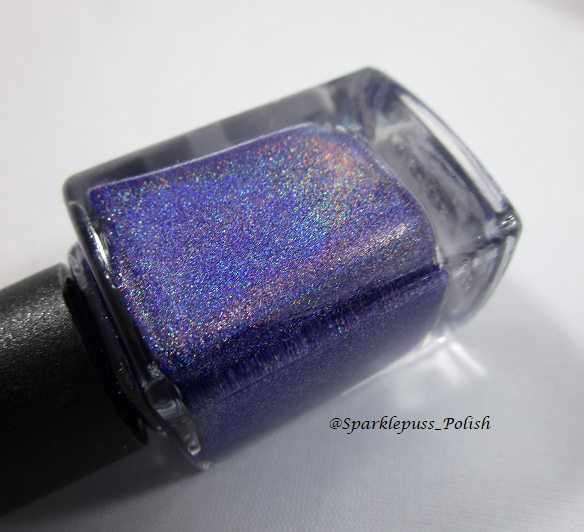 Scathed Enough In Her Time by Lollipop Posse Lacquer is actually nothing like this picture. This is another purple I had trouble with. It’s actually a deep reddish purple holographic polish. It’s gorgeous!

That’s all she wrote for this post, folks! Next post will be the last half of my haul and pics of our hotel room fun!

Thanks for stopping by!