This polish was sent to me in mini form to review 😀

Hey, everyone! So last week I told you guys we were getting a couple of pussy cats. We went to a local rescue to see what cats they had. There were newly born kittens, some toddlers, and a lot of adults. If we could have afforded 3, I would’ve definitely brought an adult home with me. We picked two toddler-aged kittens. They’re believed to be at about 14 weeks right now. So anyway, we named one Larry. It’s sort of a mixture of a Pirates of the Caribbean joke: 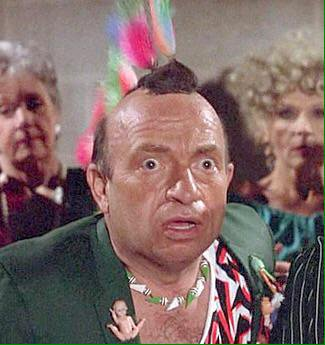 How these 2 things came together to be our handsome kitten’s name, I do not know. I wanted to name him Biscuit. lol

Now, there is another kitten. He was born feral and refused to eat or drink while here. He was also pretty scared, so the rescue is working with him a little more in hopes that when he comes home again, he’ll eat and drink. I don’t mind if he’s skittish or shy as long as he is healthy. He’s a flame point Siamese. Pics will go up when Mr. Fuzz comes home! Sorry if my ramblings bore you! I just personally like blogs where people inject more of themselves into it!

Now, finally to the nail polish! The beauty you’re about to see is Octopus Party Nail Lacquer’s first holo of the month polish! Right now Dave’s theme is women in music. Dave has this to say about Grimes-

“Grimes is a Canadian born recording artist who writes, produces, mixes, and engineers the vast majority of her own songs. From shoegaze bedroom pop to darkly textured club beats her music is wholly representative of her personality and proce…sses. A rarity in any genre, her independence and self-sufficiency has led to some of the most assured releases of the past decade. Her work is a thrilling pastiche of genres rooted in impeccable knowledge, craft, and at times, startling authenticity.

With that, let’s see the polish!

Grimes is a burgundy/purplish holo polish with purple, blue, and gold iridescent flakies and purple multichromatic flakies. This is hands down one of Dave’s best polishes yet! Now it was on preorder, but I was too sick to post this for then. BUT, Dave has said he WILL be restocking this in the future. If you want to keep tabs on it and other fun octopus antics, join his FB fan group- The Octosquad.

Close Up of Grimes by Octopus Party Nail Lacquer

Ahhhhh, the beauty of the close up. I love a complex mixture in polish and Dave has mastered that. 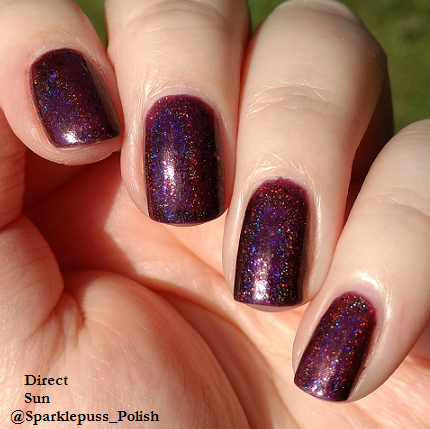 To wrap it up, Grimes is a gorgeous, dare I say VAMPY, polish with OPNL’s typical fabulous formula. It is opaque in 2 medium coats and applies like a dream. I definitely recommend joining the FB group. You get all info about restocks and such there.

So what do you guys think? Has OPNL come out with a stunning first holo of the month? Tomorrow I’ll have nail art over this!

Thanks for stopping by the bloggo!