Hi, all! How was your Monday? I felt like crap, but otherwise can’t complain. We were entertained by the nugget tonight. Ever since he was really little, he’s absent mindedly made what I call “mouth music”. While he does things, like play on his Kindle, he makes up instrumental songs. They’re sort of reminiscent of Mega Man music. Last night, he had words- “Fart, fart, fart, there’s a fart in my pants.” And then he moves onto The Swedish Chef from the Muppet Show’s “Oom bart, oom bart, oom bart, oom bart.” We called him to the top of the steps and ask him what he was singing. He swears up and down he was not just singing. What a kid.

I have been wanting to do ornament nail art for the last couple Christmases, but never had the chance. Last year I had pneumonia, so I got, like, one Christmas mani in. I had seen a really awesome ornament mani done by @laqvid on Instagram. Follow her. She does amazing marbling manis. I didn’t exactly copy it, but took some of her ideas. Hers is way better, but I’m okay with how mine turned out!

They looked prettier in person, where you can’t see every flaw the camera picks up. The blue polish is Addie Mae by Parrot Polish and the silver is The Gilded Spoon by the now defunct Gothic Gala Lacquers. Addie Mae was good in one coat, but I did 2 here just in case it would deepen the color or something. Addie Mae is absolutely gorgeous. It’s a deep blue with deep blue flakies. I think they’re flakies anyway. 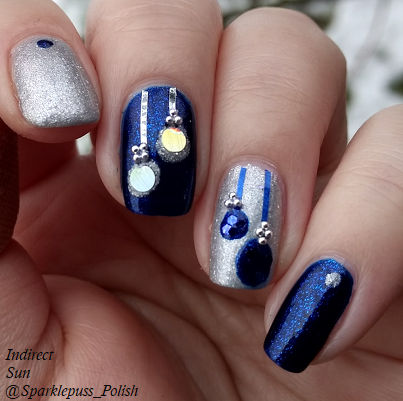 That’s all folks! Hope you like! And thanks for stopping by the blog!